Weighing in at 1.2 pounds, these Peltor Sport Tactical 100s have had an improvement in the comfort offered, with more functionality and just generally improved overall performance. They pack-away very neatly and in a very compact manner and they just ooze the type of class increasingly associated with the Peltor name. A nice gun-metal black color suggests they’d be used mostly at the indoor shooting range, but they can be just as useful outdoors as well.

While this hearing protector is good for both indoor and outdoor use, the “sporty” element it carries would be wasted if you only ever used it in the indoor shooting range. Taking them outside for some hunting or tactical shooting brings to light some design features which would otherwise not be fully appreciated by an exclusive indoor target shooter. Deep-set microphones, for example, seem like nothing more than a visual design variation, but what these sunken directional audio detectors do very effectively reduce any noise generated by the wind. This clears the way for picking up and amplifying sounds such as people’s voices and perhaps some ruffling and shuffling in the bushes, and you can then precisely detect the direction of the sound’s origin.

The soft ear cushions which line the inside of the earcups are very comfortable, so you can use these earmuffs for long periods of time, but they’re also removable which means easy cleaning. 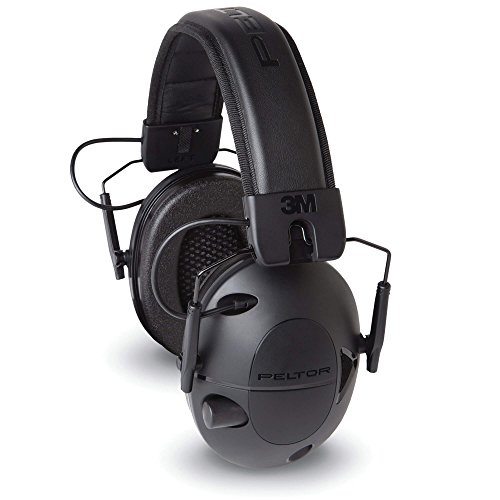 Two AAA batteries power up the electronics, which include volume control, two-way communication radio systems and MP3 players, but the 3.5mm audio input jack is sold separately. Speaking of electronics, though, the audio management system used here is unlike any other I’ve seen so far. You can mix and match audio between your connected input device and the ambient sounds of your environment. It’s almost unreal how you can have music playing but still hear ambient sounds clear AND also make out the direction of those sounds with dead accurate precision.

If all of that isn’t enough, you can only truly appreciate echo reduction in this unit if you’ve had to put up with amplified echoes in other protective headphones. Otherwise, if you’re solely looking for a decent amount of hearing protection from dangerous noise impulses, you’ll be happy with this unit’s 22dB Noise Reduction Rating either way.

Basically, if you’re looking for the type of hearing powers your favorite comic superheroes would typically have, these Peltors are the earmuffs for you. It’s nice to be able to pinpoint the exact direction the amplified sound you’re hearing is coming from, but what’s most important is the adequate protection your hearing gets. A very comfortable set of protective headbands which will deliver on their promise of reducing harmful noise levels while amplifying and enhancing those sounds you still want to hear. See other top-rated earmuffs here!

wEarPlug Copyright © 2020.
2015-2016 Wear Plug. All Rights Reserved. wearplug.com is a participant in the Amazon Services LLC Associates Program, an affiliate advertising program designed to provide a means for sites to earn advertising fees by advertising and linking to amazon.com.