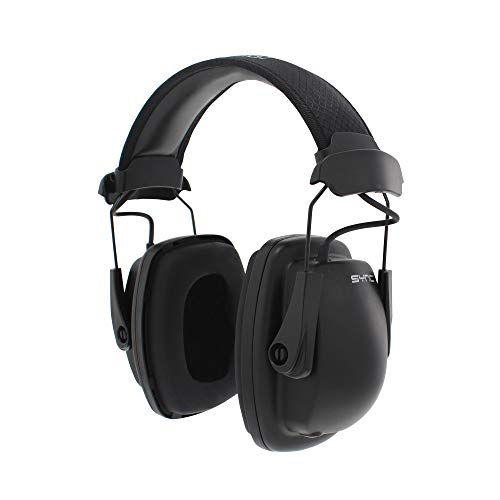 Design-wise, this is perhaps one of the coolest set of earmuffs you’d be proud to wear before you even arrived at the shooting range. They look very modern; like something a top DJ would use with the diamond-shape imprinted headband and forked attachments joining the headband to the ear cups. Black just works well with these earmuffs as the dominant color, while the plastic and metal materials complement the black appearance very well. These Howard Leight’s, which are one of the top-rated earmuffs in the market, don’t look like noise-blocking earmuffs at all and because of the integrated electronic features, you’ll probably use them for more than just protecting your hearing from potentially damaging noise levels.

With a more than adequate Noise Reduction Rating of 25dB, these earmuffs deliver safe hearing protection, which is naturally the primary function of any set of protective earmuffs used by a shooter, industrial worker or anyone who’d be exposed to dangerous levels of noise.

Now the electronic aspect of this set of protective earmuffs is pretty much what makes them come alive, although they don’t make use of their own power source, so no batteries required. The audio you’d be playing through the earphones is essentially powered by the device you’d be listening to, such as your iPod. This is a great alternative for natively powered protective earmuffs because there are a lot of people who would appreciate protective features in a set of headsets, which they can then extend the capabilities of by using that same set of earmuffs as audio headsets. Basically whether you have power or not, the NRR of 25dB doesn’t change.

Being a device that’s free of buttons, switches and other “loose” connections makes it very sturdy and durable. It can appear to be a bit too sturdy though because the issue of comfort comes into question again. You can’t really use them for too long without feeling a bit of irritation due to tightness, but after a few patient uses, they start to become a little bit loose and make for a better, more comfortable fit. This means that you shouldn’t lend them to a fellow shooting enthusiast with a much bigger head than yours, or at least not for a very long time because they might become a little too loose to fit your own head again.

When you’re not playing your own music through the audio jack input, external noises aren’t completely blocked out, but are rather reduced to safer levels.

Once you’ve used these earmuffs a few times and effectively “broken them in,” they become very comfortable and double-up as protective earmuffs and headsets nobody could ever guess were actually earmuffs to protect your hearing.

If you’re wondering exactly what type of noise this set of earmuffs can block out, think of a chain saw. You won’t want to use them for too long however, because the noise is reduced to just a barely comfortable level while their tight fit is also a bit uncomfortable if you use them too long. They work well to block gunshot sounds as well, but you’ll have to plug in your iPod or other audio input device to block out noises such as human voices and other people’s loud music. Otherwise this is a great pair of what we could call semi-electronic earmuffs which double-up as very modern-looking audio headsets.

wEarPlug Copyright © 2020.
2015-2016 Wear Plug. All Rights Reserved. wearplug.com is a participant in the Amazon Services LLC Associates Program, an affiliate advertising program designed to provide a means for sites to earn advertising fees by advertising and linking to amazon.com.